The London Marathon - raising money for Coral and David Stott

This year I'm running in the London Marathon and I will be raising money for my friends Coral and David Stott. Coral was diagnosed with Motor Neurone Disease last year.
Here are some words from Gill, Coral's daughter regarding a fundraising event that has been organised for next weekend;
"For those of you who don't know our mum's condition has worsened considerably over the past year and they have now had to have a lift installed in their home as mum can no longer manage the stairs. This is just one of the modifications they have had to make to allow mum to stay in her own home more safely. Our dad has had to cut back his hours but they are still not entitled to any help from the government and the lift, even though reconditioned, was still £6500 not including all the structural work to install it! Those of you who know mum and dad know they don't find it easy accepting help but lots of people have said they would like to do something to help so we thought that we could arrange a really good night out for all our friends and help to raise some money for mum and dad at the same time.

We really hope the night will raise awareness of Motor Neurone Disease (a really cruel illness that is not well known and we have yet to find a cure for) as well as the MNDA a charity there to help sufferers and their families. And of course to raise lots of money! Which will help with the financial strain that this is causing."
Any money I raise in addition to the fundraising event will be given directly to Coral and David to help with their financial situation. Their son Doug has set up a bank account for money raised and if you would like to sponsor me I will send you the appropriate details to make a donation - email me at matpringle3000@hotmail.com. Alternatively I'll collect any donations after the event in person - old school! I will also make a note of donations on this blog as and when I get them. Any help would be hugely appreciated. 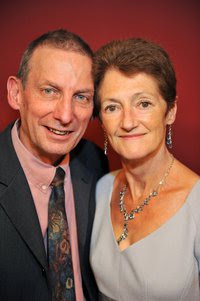 One day I'll start something a bit more narrative and finish it. But probably not today. So here's 'A Fisherman's Tale' part one. In all the story is spread out over one whole part and this is it. The End. 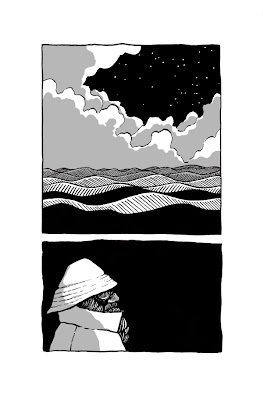 John Kenn is a Danish writer and director of kids television programs but in his spare time he occasionally draws incredibly detailed monsters on to post-it notes. They're absolutely stunning - to the point where I want to give up drawing and go back to pushing papers around a desk for a local council waiting patiently for death. 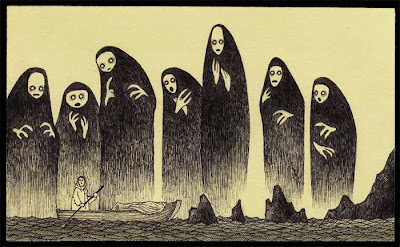 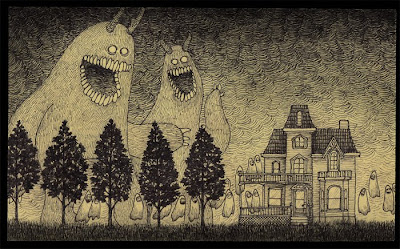 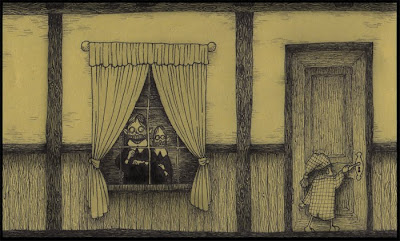 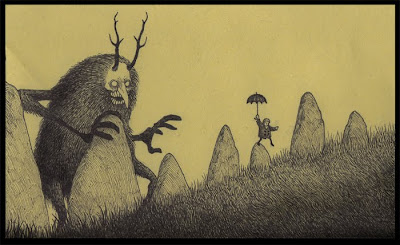 Broadcast ' The Noise Made By People' lp illustration

I was really saddened to hear about Trish Keenan passing away on Friday. Broadcast have consistently made wondrous experimental pop music combining the space-age lounge sounds of Stereolab with the experimental soundscapes of the BBC Radiophonic Workshop drawing on a wide range of sonic influences like for example The United States of America's debut album, White Noise's 'An Electric Storm', Ennio Morricone's darker soundtrack compositions (the near-Satanic 'Dies Irae Psichedlico' from Escalation springs to mind), the Czech film soundtrack to 'Valerie and Her Week of Wonders' (which was reissued by Finders Keepers and includes notes from Trish) and all manner of odd Library lps without ever sounding derivative or worse 'kitsch'. There really aren't enough bands making records these days that sound so original and forward-thinking (without being too wilfully obscure and obtuse) so it's an absolute tragedy to lose someone so gifted with so much to offer at such a young age.

A mix that Trish made for a friend just prior to touring Australia has been made available that is well worth downloading - here's the link. It's a wonderful mixture of early electronic music, psychedelia and haunting soundtracks including the suitably nuts proto hip hop of 'The Vampires of Dartmoore'.

Her friend says; "Before she went to Australia Trish sent me a mix CD of bonkers pop music she compiled, I never thanked her. It's called Mind-Bending Motorway Mix and I want to share it with you, please pass the link on, share it far and wide, it's a little tribute to a (as a friend referred to her today) exhilarating woman, we're all thinking about you, James.

"Sorry I don't have a tracklist and to be honest I like it that way. I think it's less about who you're listening to on... that compilation and more about the fact you are listening to something that Trish took time to select and compile for me and in turn yourselves. Sorry but please just enjoy the music." 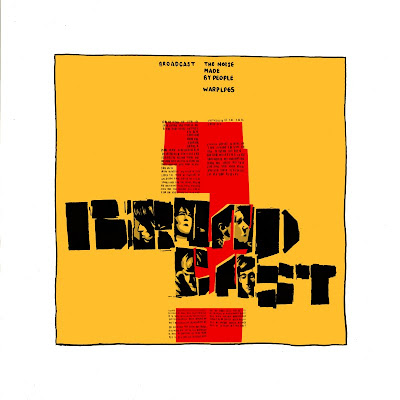 After some complex twists and turns that would've seen many other bands lose momentum/lose the will to live The Leaf Library have finally released their debut album proper and it's every bit as brilliant as I had hoped full of sublime synth driven melodies, Krauty motorik drum goodness, occasional restrained horn flourishes and the beautiful vocal harmonies of Kate Gibson and Matthew Ashton. You can download it in all it's experimental pop wonder here and pay as little or as much as you like for the pleasure - I'd recommend paying lots so they can put it out on vinyl and my illustrated series of personal favourite records doesn't sway too much from my original concept. 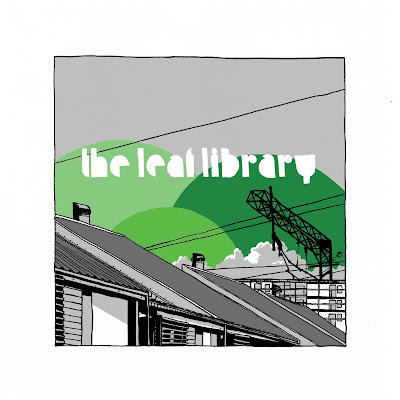 This may look like a conceited attempt to dodge any accusations of music snobbery - after all what self-regarding music snob would include a Beatles album amongst their favourite records let alone a compilation?

Truth be told I'd happily cite 'Revolver' as my favourite Beatles lp but it seems a bit misguided attempting to re-illustrate something that's already beautifully illustrated in the first place. Plus the fact I'd do it really fucking badly. 'Abbey Road' and 'Rubber Soul' would also be contenders but I was pretty much brought up on the 'Red' and the 'Blue' album. In fact I used my mum's very own copy of the 'Blue' album to draw from. It used to be my mum's copy anyway. I digress - the 'Blue' album has a couple of half-decent songs on it and I fancied trying my hand at the complex geometric perspective of the flats or something.

I also decided to move away from the shrimp eyes for this one - not really sure why as it fucks up any consistency I had going on in the series but I couldn't capture any facial resemblance with shrimp eyes. Not sure I managed to capture any facial resemblance by drawing them normally in truth - at one point Annie looked over my shoulder and mistook Paul for Chewbacca which is fairly damning/rad depending on your point of view. The Beatles would've been a very different beast if Paul had been Chewbacca but I can't help thinking Chewie would struggle with the melodic complexities of the 'Abbey Road' b side. That said I can't imagine Han Solo would put up with Paul's 'Frog Chorus' vision either. 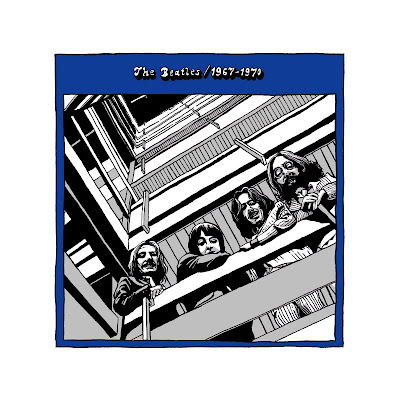 Patchy quality control is something people have criticized Tom Jenkinson about but I don't agree at all. 'Ultravisitor' is to my mind his most consistent album and it features the second best song he's ever produced in 'Iambic 9 Poetry' (after 'Port Rhombus'). In fact he's done tons of amazing songs like 'Theme From Ernest Borgnine', 'Ultravisitor', 'Squarepusher Theme', 'Beep Street', 'Journey to Reedham (7am mix)', 'Tundra' and 'Goodnight Jade' - someone that does get Squarepusher should make a best of quick. 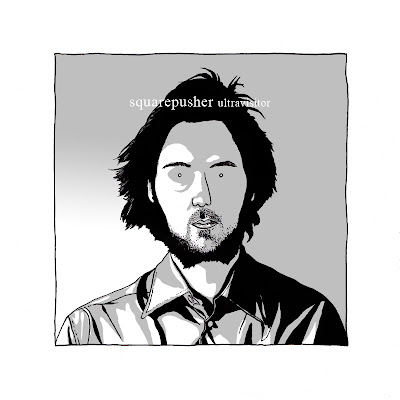