This was the project I completed especially for the MuTate Britain show only to find Print Club had been evicted a week early. Boo. It's taken me this long to screen-print and assemble but I've finally finished it. It's based on some screen-printed illustrations I completed then built up onto four layers within a box frame.  I'm so happy with it even if it has been a total labour of love! 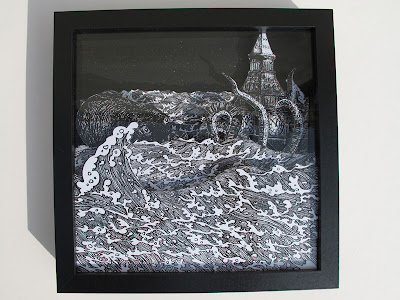 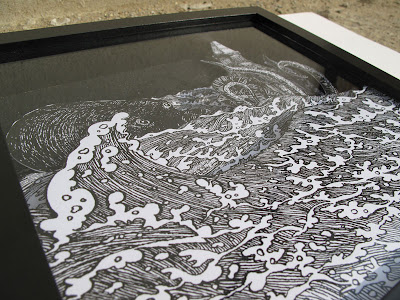 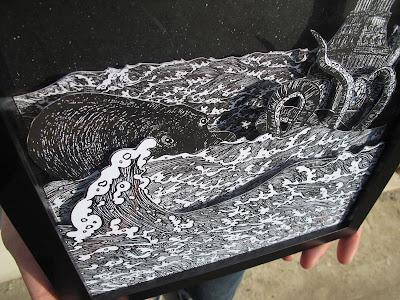 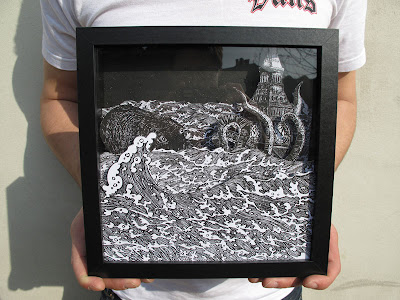 Grohs - one good turn deserves another!

Grohs did me a portrait. I was so flattered I did him one back and it was a thoroughly enjoyable couple of hours spent and nice break from poster deadlines. Dood has killer hair/moustache. And nothing makes me happier than drawing hair/moustaches. 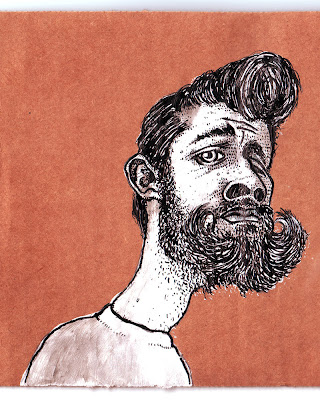 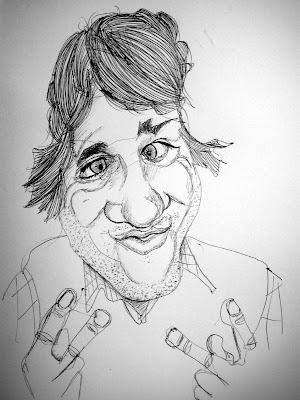 In 2007 when I finished my studies at the London College of Communication when all the students had their final year shows on I stumbled upon Laura Jordan's illustration and was instantly taken with it. That said I was too drunk to make a note of her name or anything sensible like that so I was very happy a few weeks ago when I discovered she was selling prints at Spitalfiled's Backyard Market off of Brick Lane. We bought the 'Best kebab in town' print for a tenner and were reliably informed the kebab shop was located on Kingsland Road. I haven't experienced it's culinary delights as yet - a recent newspaper article which highlighted the amount of fat/salt/shit present in your average kebab frightened me off them for good. Or until I'm next drunk/hungry/skinted at least. 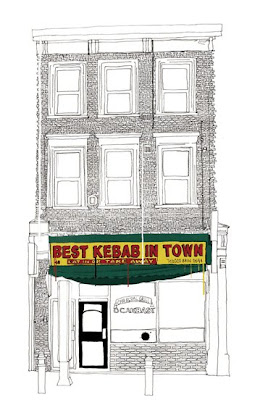 'My Home is the Sea' poster preview

Here is a sneak preview of part of my forthcoming poster for this years Print Club poster show. It's going to be made up of three or four paintings on a nautical theme inspired by the Will Oldham and Matt Sweeney song (or it's title at least!). That's about as conceptual as I get.

I've got my work cut out for the next couple of weeks as there's another poster show called 'Power in Numbers' I really want to submit for. 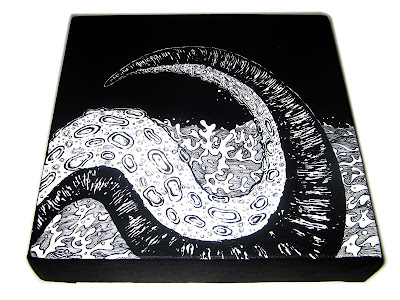 I've been waiting for this print for a while now and apparently I was not alone. They went on sale about twenty minutes ago and Tyler's website groaned to a depressing halt. Many attempts later I've bagged one - woot! For those who don't know Tyler Stout does excellent reworks of film posters and the Big Lebowski was always going to get people frothing at the bit. Wherever that bit may be. See if you can bag one too but I'd try in the next hour or all 300 will be gone.

Watch this space for an exciting and vaguely similar collaboration with my good buddy Damon. I'm already bugging out with the illustrations. 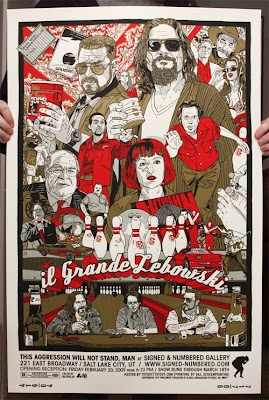 Sing Hosannah! I shall have mini-bites this Christmas and beyond! I am once again interwebueller. And what better way to celebrate than to update you on all the ever-so-slightly obtuse records I grabbed whilst in Budapest last month for my girlfriends birthday. In a nod to those odd television programmes that would occasionally drop an actor and confusingly bring in another to play an already established character (if memory serves me correctly this happened with the eldest sister in Roseanne and to Joe Mangle's son in Neighbours) in this particular episode my girlfriend is played by my good friend Richard but the spooning and hand relief was no less good.

Haul is perhaps a little too exaggerated for a meagre eight records but I was very happy with my finds not least for the bizarre exchanges that took place in their purchasing. Apparently Hungarian car-boot traders and record dealers aren't ready for hip young twenty somethings from London in tight jeans and overly clever t-shirts to swagger in to their lives requesting records by Hungarian musical luminaries such as Omega and Illes. More fool them (I am after all 31 years of age). It didn't end at Hungarian psych-pop classics neither - I grabbed some Votel endorsed Polish progressive jazz ('space hop' or something was all the description I needed), Czech beat and some other wants in the process all for very reasonable 'off-the-Bay' prices. It's nice to actually get your fingers dusty now and again and capture stuff in the wild. My only grumble returning home was to find I'd left a good wedge of nice lps and singles behind that were actually comped on the Finders Keepers 'Well Hung' collection and cost next-to-nothing. Bah. There's always next time I suppose. 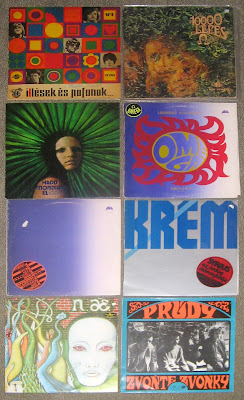